Have you ever wanted to do a crowded scene in DAZ Studio, but run into problems with limited memory? Well, there’s an easy way around that: instancing. There are some pretty severe limitations to this method, but it’s really light and easy on the memory.

First, how to do it. I’m in a fantasy sort of mood right now, so I’m going to create a fantasy warrior. Okay, here he is:

There you have it, a rather annoyed-looking Gianni dressed as a barbarian in a desert wasteland. Now for the next step, and an illustration of a hidden catch of instancing.

I’m going to select Gianni, then go up to the “Create” menu and select “New Node Instances”. It asks how many, I leave it at the default value of ten. Then voila, I have my fantasy raiding party! Or do I…? 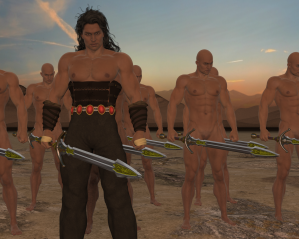 Oops! There’s something missing. If you’re going to instance a figure, the clothing absolutely has to be parented to it, or you get a whole bunch of naked people.

So now I’ll parent everything properly, create my instances, and drag each one into position. Instances can be selected individually or as a group, so you can drag the whole group into a rough approximation of where you want them, then select and move each one.

Okay, here’s my group of barbarian warriors, illustrating the one major drawback of instancing: they all look the same.

The similarity of the figures isn’t the end of the world, though. There’s a way around it. If you create, say, five different warriors, all in different poses and maybe with variations of armor, and of course different hair and weapons, then you can create instances of each warrior. Vary the number, too, so there’s maybe five black-haired guys, and eight with their swords overhead, or whatever. Then intermix all the instances and their original figures, and you’ve got an active battle scene, without completely destroying your computer.

If you have Photoshop, or any other imaging program, you can add some final touches such as dust or lighting effects, and you’re done. Put your finished image online for the world to see, and enjoy the comments about your amazingly powerful computer and the questions of “How’d you do it?”

An example of instancing in DAZ Studio, postworked in Photoshop to tweak colors and add dust.

27 Oct This entry was published on October 27, 2014 at 9:37 am. It’s filed under Learning New Stuff and tagged 3d art, DAZ, DAZ Studio, DAZ tricks, instancing. Bookmark the permalink. Follow any comments here with the RSS feed for this post.

Older: HDRI Lighting In LuxRender
Newer: crawling out of the woodwork…

3 thoughts on “Instancing In DAZ Studio”